Like other industries such as hospitality, health care, and food and beverage, the success of commercial laundries depends on the water quality. Water free of impurities is the key to making fabrics cleaner and softer, as well as maintaining the quality of equipment.

Laundry detergents and fabric softeners often leave salts, nutrients and suspended solids in the water that must be effectively filtered out. Hard water can have negative impacts on laundry, one of which is to make soap less effective, thus requiring more to be used to adequately clean. It also can lessen the wear life of fabric, making it feel stiff and appear worn.

Because commercial laundries consume and discharge large volumes of water, there are certain challenges that must be addressed. Discharging massive amounts of water not only is wasteful, but also is costly. In fact, according to the Alliance for Water Efficiency, water and wastewater costs represent more than 50% of the total operating costs in the typical commercial laundry. Facilities must find a way to cut down on waste without significantly increasing costs.

In order to cut down on the amount of water discharged, regulatory authorities have enforced stringent water quality standards to limit discharge volumes. As a result, commercial laundry operations are under increasing pressure to reduce water consumption and minimize discharge volumes.

It generally is accepted that total dissolved solids (TDS) above 750 to 1,000 ppm causes dull linens. TDS includes iron, manganese, calcium, alkalinity and other dissolved salts, all of which are known to cause linens to gray.

Consequently, effective use of recycled laundry water has been limited by the inability to affordably and reliably remove TDS at high temperatures. 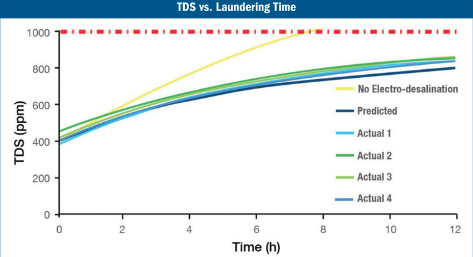 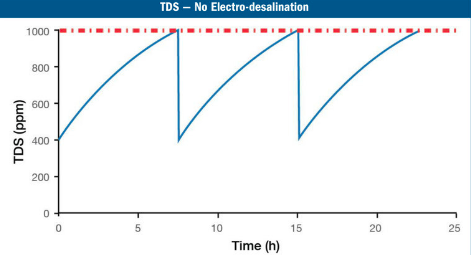 The electro-desalination system allows the laundry reuse process to run for longer because the daily discharge limit of 1,000 ppm was never reached.

A commercial laundry site in the U.S. was limited to an eight-hour work shift as a result of state regulations limiting water discharge. Traditional desalination technologies on average allow a water recovery rate of 50% to 70%, which means a laundry operation will reach discharge limits in a single workday. It was critical to this customer to find a solution for increasing its water recovery rate to allow for a longer work shift, while reducing total water consumption to meet the new water quality standards and regulations.

Instead of operating a traditional desalination technology, this company was offered Voltea’s membrane capacitive deionization technology, called CapDI, as a solution. The technology removes TDS from brackish water sources by means of electro-desalination in a two-step process of purification and regeneration. During the electro-desalination process, ions are removed from the feed water by applying an electrical potential difference between two electrodes covered with selective ion exchange membranes.

In the purification step, these electrodes are separated from each other by a mesh spacer, whereby water flows and the oppositely charged ions are removed from the feed water. The removed ions temporarily are stored in the electrical double layers formed at the electrode surface. When the electrodes become saturated with ions, they are regenerated by reversing the applied voltage and/or polarity. After the ions have been released from the electrodes, a concentrate stream is produced and captured ions are flushed from the module. It is important to note that ions are removed through membranes and water molecules stay behind. The success of the technology has made it a viable option in the global water purification market, competing with traditional desalination technologies such as reverse osmosis (RO) and electrodialysis (ED/EDR). 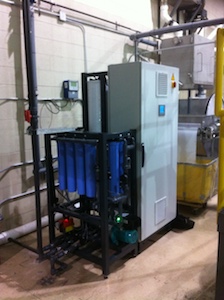 RO is a traditional desalination technology that removes contaminants from water by using pressure to force water through a semi-permeable membrane. However, RO can be wasteful and its users can lose nearly 20 gal of water for every gallon of filtered water produced. Additionally, the water is left with an acidic pH because RO removes most of the minerals in the process. An acidic pH actually can weaken the fibers of clothing and lessen its lifespan.

ED/EDR works by transporting ions through semipermeable membranes, but does not always completely remove chemicals and bacteria. Pre- and post-treatment might be needed. Ion exchange softeners can release sodium and chloride into the water, which can cause corrosion of piping infrastructure.

The benefits of electro-desalination technology—for this laundry site and other commercial applications—include:

The technology also addresses removing TDS at high water temperatures, a specific commercial laundry challenge. Traditional desalination technologies require the water to be cooled before TDS removal, which means it must then be reheated for laundering, requiring more energy, time and costs. Electro-desalination eliminates the additional heating costs plus the extended amount of time required to access this step during the workday using common desalination technologies.

There are additional cost savings because electro-desalination uses an electrical process for TDS removal rather than the high pressure required by traditional technologies, such as RO. The dynamic control and remote monitoring subscription of electro-desalination system installations allows continuous monitoring of water quality by field experts with fully automated operation. This low maintenance requirement allowed the company to focus on its daily operations instead of relying on an internal employee. Data showed the system was helping the laundry site comply with regulations while effectively removing TDS.

Notably, Voltea’s original forecast model was in line with the actual 100 data sets run over the six-month operational time period. The data in the graph on page CW4 shows that the electro-desalilnation system allows the laundry reuse process to run for longer since the daily discharge limit of 1,000 ppm was never reached. As a consequence, multiple shifts can operate, allowing the laundry to not only be more efficient, but also more cost-effective. This all was achieved at laundering temperatures, meaning there are no additional energy costs as there is no additional cooling necessary.

The addition of electro-desalination to the laundry wastewater treatment system delivered TDS removal at laundering temperatures, high water recovery and enabled efficient recycling of spent laundry water. Without the technology, this laundry facility only ran eight hours before reaching a TDS limit of 1,000 ppm. The water was drained, refilled and reheated before continuing operation.

It also was important for this laundry facility to ensure that its clients’ white linens remained white without becoming dull wash after wash. By removing TDS at high temperatures using electro-desalination, the facility was able to keep up with the quality standards of many industries that relied on the laundry site—such as hospitality, health care, industrial uniforms and food and beverage—while abiding by discharge and water usage regulations passed in its state.