There is a quiet revolution underway in the Baltic Sea, situated in northernmost Europe with shores touching countries such as Estonia, Finland, Germany, Poland, Russia and Sweden. It is being driven by climate change that is tangibly impacting seashore and island communities around the brackish water sea.

Leading the change is a Swedish Baltic island community called Sandhamn, a small picture-postcard village on a tiny island renowned for its natural beauty. The village has a year-round population of 90, but during the summer months this explodes as 600,000 visiting tourists flock to the island—just a two-hour ride by ferry from Stockholm, Sweden’s capital—to enjoy the sandy beaches, pristine sea, shopping, coffee shops and restaurants.

But there is another side to the paradise. The island community is quickly running out of natural water due to climate change creating hotter, drier summers across Scandinavia. That, combined with the growing demand for drinking water is seeing natural aquifer reserves depleting rapidly.

As Stockholm sweltered in the capital’s hottest summer since recordkeeping began 260 years ago, the situation became so potentially catastrophic in July that the local authorities warned municipal water supplies could be cut completely. Permanent residents and those with country homes on the island were horrified, not just about the risk of the water restrictions but also about the tourism lifeblood powering the local economy drying up. 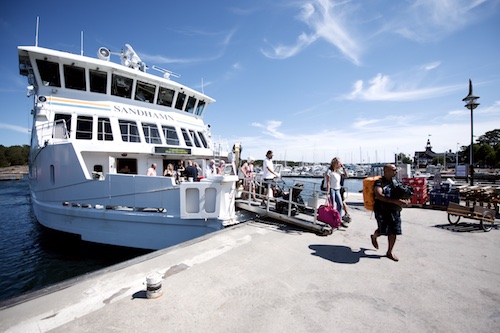 Local communities are nothing but resilient when they find their backs to the wall. Instead of giving up, the community started to look at ways to shift from its traditional water access model that was reliant on aquifers. Instead they began exploring ways to create a new self-reliant, local generation model to create on-demand clean drinking water directly from the sea.

A key player in looking for alternatives was the Royal Swedish Yacht Club (KSSS), which runs a popular marina on the island. Every summer, hundreds of recreational craft, from sleek motor yachts and sailing cruisers to old wooden yachts, from Sweden, Germany, France, the U.K., Finland and elsewhere, make a beeline for Sandhamn, as they have done for more than 100 years.

The KSSS sailing club realized it needed to act to protect the marina, so it turned to a Stockholm-based company called Bluewater, which it had met in the early summer of 2017 during the America’s Cup competition on Bermuda.

During the cup, Bluewater demonstrated how its water purification technologies could be harnessed to not only purify municipal water, but also create rainwater harvesting systems on Bermuda, another island community of around 60,000 citizens with limited natural water reserves. Almost every home on Bermuda is designed to collect and store rainwater to supplement the municipal supplies that can be delivered. 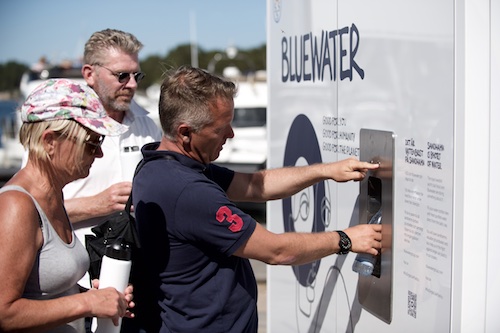 Hydration stations pump water from the Baltic Sea and treat it for drinking.

During the summer of 2017, a pilot drinking water generation scheme was implemented in Sandhamn marina. A single Bluewater hydration station was built to pump water directly from the Baltic Sea and generate clean drinking water. The station was equipped with a compact Bluewater Pro water purifier which is engineered to handle brackish water and deliver more than 7,000 liters, or 1,850 gal, of purified water to marina visitors every day.

“We have used our human ingenuity and existing technology to create a unique water harvesting and delivery system that turns brackish sea water into safe freshwater on an island experiencing aquifer exhaustion due to the huge number of visitors,” said Bengt Rittri, Bluewater founder and Swedish environmental entrepreneur. He said the island is just one of the 200 inhabited islands of some 18,000 islands in the Stockholm archipelago that are all increasingly suffering water scarcity due to unsustainable demands placed upon natural water reserves.

Magnus Woxén, head of operations for the KSSS, explained the marina’s needs.

“We needed to create a micro-renewable water generation grid creating a self-sustaining system capable of producing nearly 45,000 liters (11,888 gal) per day, which means visiting yachts at the marina and other tourists do not need to use Sandhamn’s local water supply.” 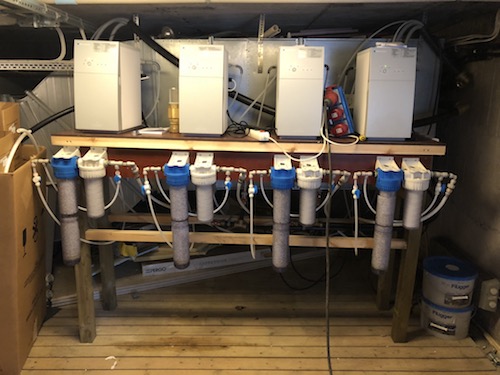 Each water purifier can generate 7,000 liters per day of clean water.

The technology being used on Sandhamn harnesses six compact Bluewater Pro water purifiers designed to handle brackish water. Each water purifier is able to generate 7,000 liters per day of clean water, which then is pumped into an inline series of three cisterns for delivery to a group of centrally located water points in the marina. A freestanding Bluewater hydration station delivers chilled still and sparkling water to visitors.

“We are moving towards a day when we won’t need to build and rely solely on large-scale water plants,” said Anders Jacobson, president of Bluewater. “Instead, we will have distributed water solutions where small water supply systems are in place near the point of consumption, which will be able to harvest water from multiple sources such as rainwater, brackish water or surface water not deemed fit for human consumption previously, while also slashing the need for non-sustainable bottle water.” 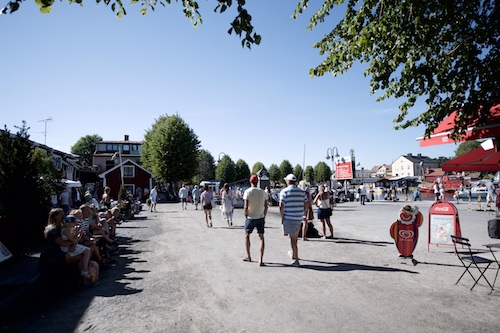 The Swedish island community is a two-hour ferry ride from Stockholm.

The private initiative in a country where citizens take for granted that government and local authorities take responsibility for supplying all basic services has won the blessing of local authorities keen to reduce dependence on costly outmoded large-scale water delivery models and unsustainable single-use plastic water bottles.

Bluewater, which manufactures and comercializes compact water purifiers for residential, business and public use that use the company’s patented reverse osmosis technology to remove all pollutants from tap water, including microplastics, believes human ingenuity can be harnessed to solve problems such as those in the Baltic Sea. To that end, the company this year offered $1 million in prize money in a global innovation challenge for urban water scarcity.

“Over the next three decades, projected demand for water in cities such as London, Moscow and Miami will increase by 70%, resulting in more scenarios similar to Cape Town, which is suffering acute drinking water scarcity,” Jacobson said.

The 2018 Urban Drinking Water Scarcity Challenge is seen as an exciting opportunity to unleash “waterpreneurs” to help people and urban authorities in large cities manage water resources in an age of growing scarcity. One of the challenge winners includes Denver-based Microlyze, which has won additional investment funding for $500,000 over and above the challenge prize money.

“Microlyze [is] deploying real-time water testing devices to empower households and provide cost-effective monitoring for U.S. utilities ... it is a game-changing gadget because now consumers will be able to see what’s in the water they are drinking,” said Ari Kaufman, CEO and founder of Microlyze.

Microlyze is the shape of the future, according to Jacobson, as “it proves the benefits of smarter water management in the face of rapid urbanization and looming drinking water shortages such as those suffered in Sandhamn, Cape Town or in California.”

David Noble is head of communications for Bluewater. Noble can be reached at david.noble@bluewatergroup.com.