At the End of the Rainbow

Pungent and sometimes toxic algal blooms in waterways are increasing, causing a variety of health-related issues and environmental degradation. Climate change and pollution are at the source of most algal blooms, making it a difficult problem to solve. Nitrogen and phosphorus are algae’s main food sources. They enter waterways through pollution from industrial or urban sources. These nutrients can build up in sediments, providing food for algae for years even when nutrient inflow to the lake already has stopped.

Blue-green algae, also known as cyanobacteria, can cause illness in humans and kill animals through the production of a variety of toxins that are released in the water. During drinking water treatment, algae growth may hinder the treatment process by clogging filters and increasing trihalomethane formation and the use of water treatment chemicals. In addition, taste and odor molecules produced by blue-green algae give a foul taste and odor to the water that is difficult to remove from the final product.

For the last decade, the main method used by water treatment plant operators to remove algae from reservoirs has been the addition of chemicals. Although these methods are considered fast and economical, their impact on the ecological balance of a waterbody cannot be disregarded. Effects of chemical algal control may include toxicity, lysis of algal cells and non-target response, resulting in the degradation of the overall water quality. 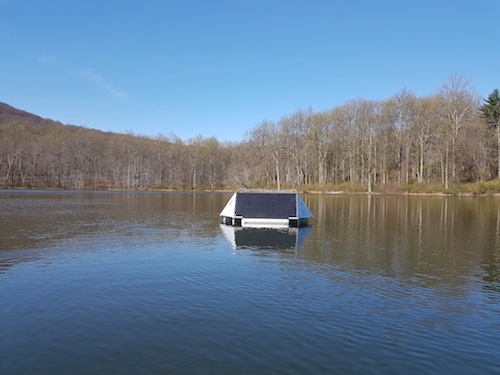 The buoy was installed in Rainbow Lake in Emmitsburg, Md.

The city of Emmitsburg, Md., operates an 11-acre drinking water reservoir called Rainbow Lake. The town has experienced issues with algal blooms, mainly during the summer months, which led to an increase in chemical use in the treatment plant to manage the higher levels of organic material in the water. In addition, water consumption during algal bloom events increases as filter run times decrease. The town has used copper sulphate in the past to deal with algae issues; however, due to a change in permits, the use of copper sulphate was discontinued. Alternative algaecides have been used in the reservoir but did not perform well. In collaboration with Kershner Environmental Technologies, the city of Emmitsburg installed an MPC-Buoy system in Rainbow Lake in April 2017 to monitor and control algae continuously.

The MPC-Buoy is a floating, solar-powered buoy that can be anchored in the middle of a lake or reservoir. These systems provide a chemical-free solution for algal blooms. The system controls algae by using a relatively low-power ultrasonic signal emitted over the surface of the reservoir. The ultrasound of one system can cover a surface area of approximately 50 acres. Algae rely on buoyancy to float close enough to the water’s surface to absorb sunlight. This allows them to outcompete other organisms in the water, such as plants, that also depend on sunlight intake. The ultrasound used by the systems fixes the algal cells in a deeper layer of the water column, preventing them from taking up sunlight at the surface.

The ultrasonic parameters that the system uses are optimized to the shape and behavior of the present algal species. Algal cells vary in size, shape and cell composition between all different species found in a reservoir. As these species also may vary by season, the systems alternate between different ultrasonic programs based on the present water quality.

Since 2005, LG Sonic has been investigating the effects of ultrasound on specific algal types and different types of waterbodies and variations in water quality. In collaboration with several European universities, the company has created a database defining optimal ultrasonic parameters for different algal species and water quality characteristics. By continuously updating these ultrasonic parameters, the system prevents algae from becoming resistant to ultrasound.

The buoy system automatically monitors, analyzes and predicts algal presence in the waterbody. For the collection of water quality data, near real-time sensors are used to measure pH, chlorophyll, phycocyanin, turbidity, dissolved oxygen, and optionally nitrogen and phosphorus. Based on this information, the system can determine the presence of different algal species, forecast algal blooms and automatically change its ultrasonic parameters. This is called interactive algae control. 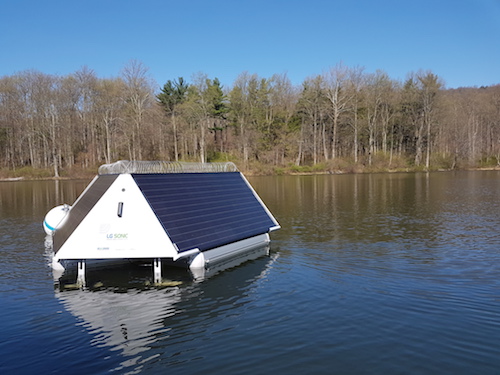 The buoy system automatically monitors, analyzes and predicts algal presence in the waterbody.

To assess the effects of the buoy system in Rainbow Lake, the town looked at data from the same months in 2016 and compared it to data in 2017, when the buoy was installed. The main data considered includes water usage, number of backwashes, overtime and chemical costs. Although the number of filter backwashes in the plant did not decrease, water usage for backwashes did significantly decrease from 19.71% in 2016 to 14.08% in 2017. The roughing filters required much less water to clean. The amount of water used for backwashes was reduced from an average of 1,459,888 gal per month in 2016 to an average of 1,075,000 gal per month in 2017, for a total reduction of 384,888 gal per month or 26.4% savings.

Another significant improvement was in the chemical costs of the plant, which were reduced by 27% compared to 2016. The main savings in chemicals include:

Other improvements on the plant operations were in the average flow from the lake, which exceeded the target flow of the treatment plant. Also, overtime pay at the water plant was reduced by 31%, leading to nearly $3,000 in savings.