Throughout the country and the world, there have been increased efforts to incorporate renewable energy technologies that ultimately reduce carbon footprints and provide cost benefits to companies, municipalities and regions. However, while the concept of these technologies may make all parties happy, the implementation often presents unique challenges that must be addressed in order to succeed. 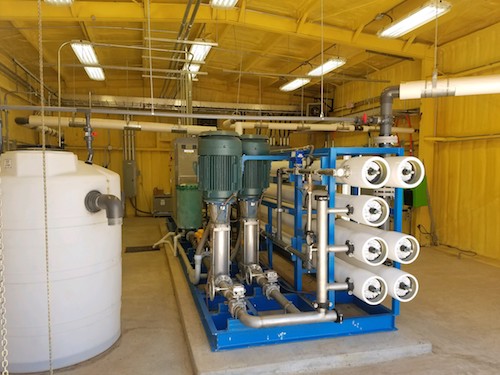 The RO system is capable of processing up to 250,000 gal of water per day.

Such was the case in 2012 in the city of Colorado City, Texas, located in Mitchell County, a municipality that was seeking to implement a water desalination system. What made this installation more challenging than most was its location in a rural area lacking consistent connectivity. Water in regions such as these can be scarce and expensive, and a fully functional water desalination system would provide economic and health benefits to the region. Additionally, this installation would be different from previous projects in the state, as it would be the first of its kind in the area to deliver potable water through a system powered by wind turbines. After receiving a grant worth approximately $2.6 million from the Texas Department of Agriculture, Mitchell County set out to establish the system and provide its residents with clean, drinkable water.

The desalination system needed to support not only the existing population of more than 4,100 residents, but also support any future growth. In the event of a rapid boom in population, the system needed the potential to scale up quickly to provide enough drinkable water for the county. To ensure water quality and the potential to expand, Mitchell County turned to Alan Murphy of Alpha Water Resources to design and implement the reverse osmosis (RO) system for the project.

The Mitchell County Board previously worked on the original system design with Murphy when the plans were in their beginning stages. In these initial discussions, the primary objective was to develop a highly efficient, yet cost-effective treatment process capable of handling high brackish groundwater with total dissolved solids (TDS) around 8,500 ppm and produce high-quality water in compliance with safe drinking water standards set by the Texas Commission of Environmental Quality (TCEQ). To achieve this, Mitchell County purchased an RO system from a Houston-based company, but needed someone to properly install it.

Once the infrastructure for the wind turbines was set, Mitchell County reconnected with Murphy and Alpha Water Resources to complete the project implementation and commissioning. In collaboration with the selected engineering firm, general contractor and TCEQ, Alpha Water focused its design for the system on developing an optimal treatment process for maximum production rates with the lowest possible operating expenses. Additionally, the team looked to reduce maintenance and cleaning frequency of the membranes, chemical usage and energy consumption, while providing a longer membrane life and high quality water. To meet these design goals, an anti-scalant chemical feed system was chosen as pretreatment prior to the RO as a scale inhibitor to prevent fouling and scaling caused by carbonate, silicate and sulfate hardness in water. A multiple stage hybrid array configuration was selected for the desalination unit to maximize recovery rates up to 80%.

As the first stage reject water with TDS concentrations of 23,000 ppm entered stage two, hybrid array configuration helped in the additional recovery. A hybrid membrane arrangement was utilized low-energy brackish water membranes in the first stage and low-energy seawater elements in the second stage. Seawater membrane elements in the second stage were able to handle high feed salinity up to 32,000 ppm and to withstand high operating pressure up to 1,200 psi. An interstage booster pump was installed between the first and second stages to even out the flux rates across the stages. Additionally, an interstage booster pump was used to increase the feed pressure. This helped overcome higher osmotic pressures due to the high salinity of up to 23,000 ppm in the second stage. 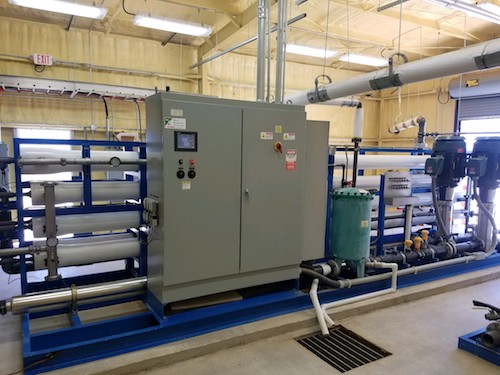 The system is equipped with custom-built automation and controls package, and a software program for fully automatic operation.

The overall system recovery rate provides the highest recovery rate possible with feed water quality that had TDS in range of 8,500 ppm and high potential of silicate sulfate scaling, reaching 80%. The blend facility is incorporated in the RO skid up to 10 gal per minute of filtered feedwater and can be blended with the RO permeate to accomplish the TDS concentrations in compliance with TCEQ drinking water standards. The final finished water then is stored in an onsite finished water storage tank for delivery to distribution system.

Automation and controls also are leveraged to simplify and streamline the process for operators. The RO system has a programmable logic controller with a human machine interface display to automate the system. It also is equipped with custom-built advance automation and controls packages and a proprietary software program integrated for a fully automatic operation that requires minimal operator intervention. With this proprietary software, Mitchell County can remotely control the operational status of the RO system, making the process simpler. The system also can be remotely accessed online for monitoring, data recording and troubleshooting, which streamlines efficiency for operators. The system addresses worker safety, as it features a number of safety devices and alarm shutdowns to protect the desalination unit from common fault conditions.

Before being delivered for distribution to the general public, the finished water is disinfected with gas chlorination to maintain a chlorine-free residual of a minimum 0.2 mg/L and a maximum 4 mg/L in the distribution system. A caustic injection system was installed to maintain the pH greater than 7, but has not been utilized much as final blended product water quality has a pH level ranging between 7.5 and 8.

The resulting system now is capable of processing up to 250,000 gal of water per day (gpd) for the residents of Mitchell County and Colorado City. It also fits the county’s demands for expansion with the potential to scale up to 1 million gpd in the event of rapid population growth. Mitchell County Economic Development was able to implement the new RO system within six months, a small portion of the six-year project.